For the past few days or so, my Facebook timeline has been flooded with news about the tiger that had been roaming the streets of Atlanta. Many seemed bewildered for the most part. C’mon, is it really that shocking? Let me explain.

The Bengal tiger wandering around Atlanta was named Suzy and she was just 6 years old. I say was, because unfortunately she met her demise from a series of gunshots that took her life. Originally the plan was to tranquilize the tiger, but after she found her way into an Atlanta residential neighborhood and pounced on a pet dog, local authorities quickly took her out. Thankfully the dog survived and no people were hurt, but Suzy obviously wasn’t so lucky.

After PETA offered up a reward to uncover what happened, it was discovered that Suzy was among a group of tigers being transported from Florida to Tennessee for Feld Entertainment, the same company that owned the cruel Ringling Bros. and Barnum & Bailey Circus. It was shut down for good reason, but instead of sending the animals to sanctuaries to live better lives; they greedily sold them off to yet another circus overseas in Germany to continue the cycle of exploitation. While passing through Georgia, that’s when Suzy escaped.

BUT HOLD THE SHOCK.

So why shouldn’t you be all that surprised by a tiger being spotted out in public? Well, we live in a world that has completely normalized the use of wild animals as human entertainment. From a very young age, we’re taught that there’s nothing unusual about seeing wild animals in a cage or even as pets. School trips to the zoo, a birthday outing to the circus, swimming with dolphins during family vacation; the list goes on really. Whether at home or abroad, there are many examples of people dishing out money to be in the presence of captive wild animals.

As kids we just follow whatever our parents, school, and society as a whole deem as normal behavior. We don’t question it. But now that we’re older, I challenge us all to pause and think about it logically. How is it normal to snatch wild animals out of their natural habitats (usually in infancy), and then force them to spend the rest of their lives performing for us? And don’t forget that in order for these normally dangerous animals to be safe enough for human beings to be around, they are often subjected to brutal training practices.

Even some zoos are bad. While there are zoos that play a valuable role in the conservation of endangered species, and the rescue and rehabilitation of wild animals; not all are as ethical as they seem. Unless an animal is in a zoo to live a better life, then they’re really just existing for your entertainment–so doing your research before visiting a zoo is imperative. But wait, what’s the big deal for the ones who aren’t there for conservation or rehabilitation reasons? It’s not like they’re performing circus tricks, so it’s okay right? I mean…would you be cool if you were sentenced to life in prison behind bars? Pretty much the same scenario, except these animals didn’t do anything wrong.

No wonder Suzy bounced. She wasn’t about that life.

What happened to Suzy was tragic and we as a society need to do better. If wild animals can cause as much fear and commotion when roaming public streets as Suzy did, then they should never leave the wild to begin with.

Honestly guys, we really just need to let these animals be. Unless their lives are at risk due to poaching, deforestation, or any other destructive human-induced problems, then we need to leave wild animals alone. Ethical sanctuaries that exist purely to protect animals are great. Cruel animal attractions that profit from exploitation are not.

WHAT CAN YOU DO ABOUT IT?

Aiight peeps, so if you didn’t know how effed up animal attractions are, you do now. And knowing is only half the battle. Take that knowledge a step further by taking some action.

Let’s help prevent our friends and family from being the victims of accidental wild animal attacks, and also help protect wild animals like big cats and other exotic creatures from being used as pets and entertainment.

There are currently two revolutionary federal bills that can help do just that:

PS. And for God’s sake, please tell your friends to kindly cease and desist with the lame vacation animal selfies! Don’t have them out here looking crazy AF on Instagram. If you know someone who needs further explanation about this, I have another post for you. 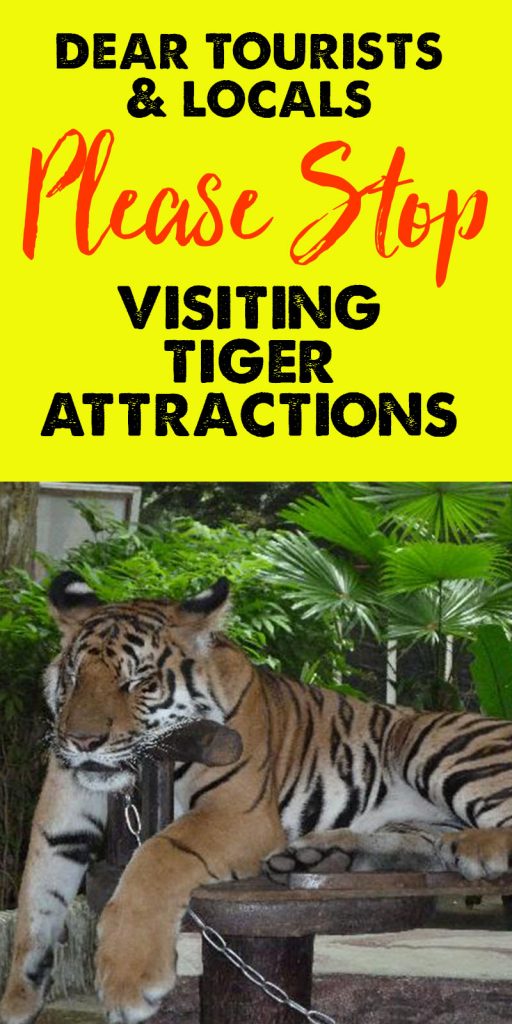