Skip to content
"I will save the animals." Yes he will! 🥰 Or at

Giving the closing speech about climate action on

I don't wear makeup every day, but when I do, I ma

The rising temperatures from climate change have b

Welcome to Beyond’s favorite spot on the patio!

Repeat after me: “I can do hard things.” This

Happy birthday to my dad! He's one proud grandpop.

I thought it would be nice to plan a last-minute getaway to Savannah for Valentine’s Day last year with Karl, because why not? Seemed like a great idea in the 5 seconds I spent thinking about it. I was just so certain my bright idea to spend a romantic evening on a riverboat dinner cruise was flawless…except for a couple things that failed to dawn on me before we arrived: 1. Karl hates boats and 2. It’s cold AF in Georgia in February.

But this is the part where I tell you that despite my flawed thought process, or lack thereof, we still had an amazing time. Why? Because 1. Karl is so entertaining, that we could have spent Val Day stuck on an elevator with Kristen Stewart, and still not get bored and 2. We’re both savvy and always find ways to make a comeback.

Here’s how we turned what should have been a cold and dreary trip into a memorable Valentine’s weekend.

Watch Our Video (or continue reading below):

Before going to our hotel, we decided to drive a little further to Tybee Island, where they were celebrating Mardi Gras that day. Although Mardi Gras in Tybee Island doesn’t come anywhere near the level of exciting debauchery you would experience somewhere like New Orleans, it’s still a celebration complete with parades, a street party, live music, and drunk people busting out their best drunken dance moves. It’s a family-friendly event that we probably wouldn’t mind returning to when we’re married with kids (oh shit, that’s like right around the corner).

~TL Tip~ If you love seafood, you must stop at The Crab Shack on Tybee Island! It’s a must for me every time I go to Savannah (we just didn’t have time to on this trip).

You know we have a thing for views. So we splurged a little on a room with a nice view at Savannah Marriott Riverfront. As its name suggests, this hotel is located smack dab on Savannah’s historic waterfront and is directly connected to River Street, a favorite strip of mine that I’ve frequented over the years with friends due to its awesome lack of open container laws. If it were warmer and we had more than one night to spend there, I think we would have appreciated the perfect location of our hotel even more.

To reiterate, it sounded like a great idea in theory, but here are the FAIL moments:

We DID, however, have a blast people-watching and cracking jokes.

And with every fail moment, this dinner cruise did have its WINS:

This place was PACKED and clearly the place to be the next morning. We loved our breakfast at J. Christopher’s and it completely hit the spot after our flavorless dinner debacle from the night before. Karl enjoyed sinking his teeth into the blueberry crunch pancakes he ordered, while I gave in to my typical craving for Eggs Benedict (or in their case, the “Eggs Christopher” as they called it).

Well…just look at the logo for Lulu’s Chocolate Bar. It’s a woman sitting on the rim of a martini glass with a large slice of decadent cake in her hand. Chocolicious adult drinks + chocolicious desserts = the kind of drunkenness you aren’t likely to recover from right away. It was the ultimate sugar high and one I didn’t even feel guilty about.

I promise you we aren’t some creepy morbid couple. It sounds like an odd place for a pair of young lovers to venture off to for a romantic afternoon, but it was so freaking beautiful! You can either drive around the cemetery or tour it by foot and we did a little bit of both. The dangling Spanish moss and old Victorian graves gave it a kind of eerie charm that made strolling through it a unique experience.

PS. Karl is totally my “Instagram Husband” when we travel.

Don’t know what an “Instagram Husband” is? You MUST watch this hilarious video to see what I mean: 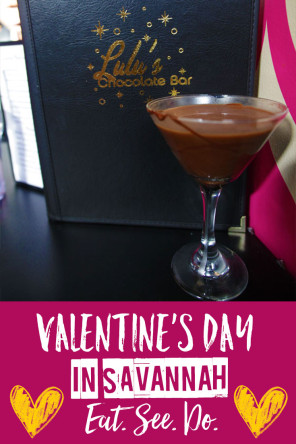